November 17, 2016, Amsterdam. In a ceremony at the 10th annual European Pro Bono Forum, ACTEDO receives the European Award for Local Pro Bono Impact in recognition of its outstanding contribution to promoting pro bono lawyering and access to justice in Romania. The award, set up by PILnet (The Global Network for Public Interest Law), one of the biggest international organisations promoting the rule of law and human rights through legal tools, honours the best innovative pro bono legal project at the local level in the EU. In 2016 this project is ACTEDO’s The Pro Bono Network for Human Rights.

“We are very proud of this award, especially since pro bono lawyering is neither regulated nor encouraged in Romania and there are many people, especially from vulnerable groups that deal with serious human rights violations. We have worked really hard in the past 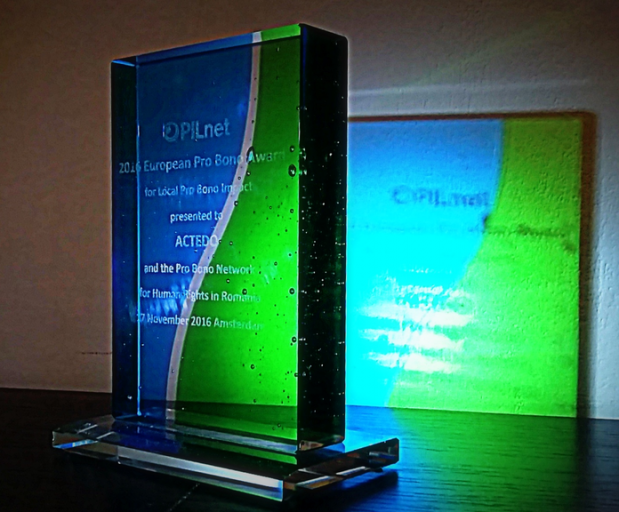 2 years, encouraging lawyers to take an active stance in facilitating the access to justice of the most vulnerable members of society, as well as promoting legal tools among NGOs. We compiled our results into an Activity Report, which we have sent to 14 public authorities (Government, ministries, Bar Associations), together with our recommendations, which include promoting pro bono as an effective tool for defending human rights and increasing access to justice. However, recently a new national regulation has imposed several restrictions on pro bono practice and we will need to see how to address them in the nearby future. As such, we take this award as an incentive to continue our work!”– Iulia Pascu, ACTEDO, the coordinator of The Pro Bono Network for Human Rights.

ACTEDO’s Pro Bono Network for Human Rights was one of the five projects to be shortlisted in the final, from 17 remarkable pro bono initiatives from member states of the European Union.

“The project led by ACTEDO has truly impressed us, not only because of the commitment of its staff members and volunteers, but also because of the tangible impact achieved during this short period of time in the legal and NGO community. I am convinced that the NGOs, community groups and individuals from rural Romania who seek professional pro bono legal advice for their own or their communities will benefit from this outstanding project […]. I wish ACTEDO good luck and courage in their future efforts creating such a great alternative access to justicescheme in Romania.” – Tamas Barabas dr. jur. Senior Legal Office, PILnet Foundation, Budapest.

About The Pro Bono Network for Human Rights. Since its launch in 2014, The Pro Bono Network for Human Rights has provided legal assistance and representation in court to over 150 individuals and NGOs across Romania on various issues, including discrimination, gender violence, rights of people with disabilities, and forced evictions of Roma. The Network has grown constantly and is now comprised of 4 law firms and 50 individual Pro Bono Attorneys from various regions of Romania. In addition to proving legal aid, ACTEDO’s Pro Bono Network has also worked to promote legislation regarding human rights and to raise awareness on the vulnerability of certain groups, while in the same time encouraging a pro bono culture and passion for human rights among Romania’s legal professionals. Additionally, ACTEDO has held training sessions on anti-discrimination legislation and case-law for lawyers in partnership with the Center for Legal Resources, work meetings with NGOs dealing with vulnerable groups, as well as two public debates on access to justice and the use of the legal clinic as a human rights tool. Ultimately, ACTEDO’s goal is to ensure effective access to justice for all citizens, regardless of their financial abilities and social vulnerability, thus creating a truly equal environment. 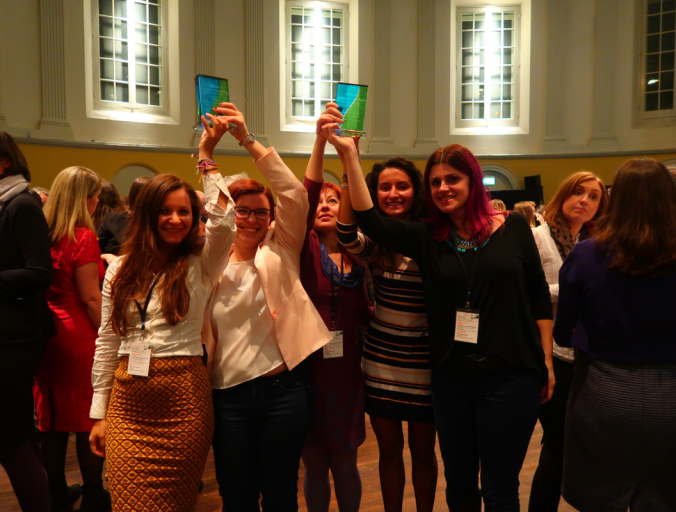